You are here: Home / News & Events

All sections meet again in August following the start of the new school terms.

Following a competition for community groups to apply for a share of £10,000 allocated to the Springburn Ward of Glasgow City Council the 200th finished in 3rd place from a group of 10 applicants at an event in the Rainbow Hall, Royston last night, 21st April 2016.

Our application to allow us to purchase new static camp tents, support our Junior Section trip to St. Andrews and to upgrade our WiFi was well received during a 3 minute ‘live’ presentation to members of the local community. We received just over £2000 to support our projects.

This video gives some background on the Founder of the Boys’ Brigade, Sir William Alexander Smith 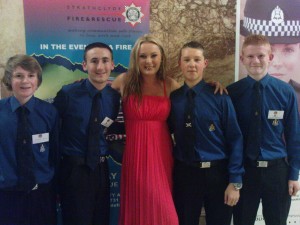 Representatives from the 10 city wide winners in each of the categories (Individual, Team, Public Service, Neighbour, Public Service Team, and Young Community Team Award) were treated to a great night in the Banqueting Hall of the City Chambers at the Grand Final of the Glasgow Community Champions Awards last night (Wednesday 7th October).
The event was hosted by Heather Suttie of the Evening Times, pictured here with Charles Feeney, Gary Gordon, Craig McMurray and Owen Vickers of the Company Section
Our category was won by St Paul’s RC High School’s community volunteers for their campaign on road safety along with the organisation of Christmas parties for OAPs and helping out in nursery schools.

The night was a showcase for volunteers throughout the city who had been recognised at each of the 10 events held since November 2008.